My Beautiful Aston Martin – Part 3, The First Year and a Half

I thought I should conclude my mini-series on the V8 Vantage after having covered the buying process I went through and the car itself, I believe it’s fitting to finish the series on how my first year of ownership has panned out.

For anyone who has missed the earlier blogs, please click the links below.

My Beautiful V8 Vantage, Part 1, The Story of how I ended up in Aston Martin Ownership

My Beautiful V8 Vantage, Part 2 – The Car itself 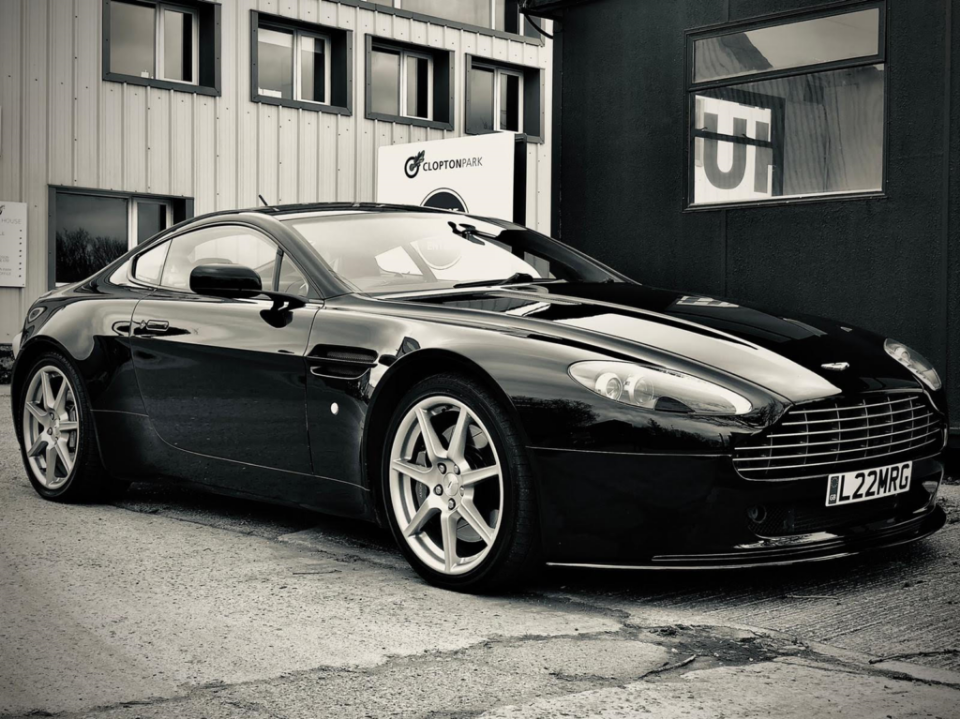 So, going back to the moment I bought the car, I initially viewed it in the most glorious of days, the sun was shining and the temperature was around 28 degrees, picking the vehicle up four days later was an entirely different story!

I mentioned in part one how the bank fiasco went in transferring the funds and how myself and Jon (the seller) returned to the underground car park and got back in his vehicle to see it was extremely clear the weather had changed drastically, with hail and rain  pouring down, great I thought!

With the paperwork completed  and as I had already viewed the vehicle previously and this was the collection I completed the insurance policy on the journey up (Admiral – £500 pa,  for those curious)

At last, after saying my goodbyes to Jon, I made a mad dash to the car through the rain with the paperwork under my arm. I was finally in the driver’s seat with my key in my hand, I was so excited!

I started the engine and slowly pulled out of the yard. Driving home that day, it completely poured down the whole way, it took me a lot longer than anticipated due to how poor the weather was but I didn’t care, I was an Aston Martin owner and I was going to enjoy every moment of this drive irrelevant of what the gods above were throwing at me.

three and a half hours after leaving I arrived home, the car looked like a drowned rat and I was pretty knackered having left early to get three trains and two tubes to reach the car coupled with the fact I didn’t blink the whole way home due to the conditions!

During the first two weeks some odd things happened that any new Aston owner will need to adjust to, even more so when coming from previously owning BMW’s.

The first, you cannot put fuel in these cars without ending up in a life story of the car with an inquisitive member of the public, I can only describe it as being pounced on!!

Secondly, be prepared to be first out of any junction, everybody lets you out. It’s incredible. My old M3 would spend weeks at junctions, not the Aston!

Third thing, it doesn’t matter if people like or hate cars, the Aston badge is loved by everyone in Britain, be prepared to spend countless times talking about Aston Martin. An example of this was I had cleaned the car on the drive, my partner asked me to take some bottles to the local recycling bank, I decided to take the Aston, what should have been five minutes there and back turned in to over one hour as I was stopped by a lovely older gentleman in Tesco’s car park who wanted to speak all things cars as he had seen me pull in and couldn’t resist coming over.

Another occasion of this was an American gentleman giving me a huge “Woop Woop” for want of better words followed by “that is one cool f**king machine man” at the top of his voice whilst I calmly filled with fuel.

Moving on, two weeks later I was due to take part in a road-trip with 65 cars to Scotland, having sold my previous car there was a time I didn’t think I’d have anything to compete in but now I had the V8 Vantage! Unfortunately I was driving solo in the event as only the night before my co-driver had a heart attack and was rushed to hospital and whilst he has recovered well and is full of life again he clearly wasn’t coming on this mad trip to Scotland.

I started the trip by heading to Dagenham to meet several friends who were also competing in the event, we then headed to Durham. Over the next few days we travelled through the Northumberland National Park, to Edinburgh and then back down to Suffolk. It was an amazing few days with great company and with passengers from other vehicles jumping in with me for different legs of the trip it worked out well.

The car handled fantastically and without any issue over the trip which was around 700 miles. It gave no cause for concern and hasn’t done all the way through my ownership.

I have completed some light maintenance, one thing to note with these vehicles is there are a lot of Ford, Volvo and even the odd BMW and VW parts amongst the car. Some people like to call this out as your driving a glorified Mondeo however I like it because it means I can cross reference parts and get the exact same part for very little money by sourcing it from the other manufacturers and not direct from Aston Martin.

Examples of items I have fitted or bought for later and sourced through alternative suppliers include:

When changing the oil I also changed the oil filter, sump plug and O-ring which were original parts and less than £35 delivered via HWM Aston Martin in West London.

I have also replaced the gearbox oil, the exact correct grade is only sold by Castrol to Aston Martin dealers at a cost of £20 per litre and five of these are needed. There are cheaper and very similar grades available off the shelf but I Bamford Rose (a well regarded Aston Specialist) advised me the exact oil is only via the dealer itself.

Again HWM Aston Martin assisted with this oil and their home delivery service was amazing, also providing a 10% discount off the order for using them previously.

The rear tyres I have replaced too during ownership, my mechanic whom I trust with all my cars (Jamie @ Bridge Place Autos) stated the originals had some good life in them but I was happy to change them over and begin my journey in this car with fresh rubber.

As mentioned in my previous post, this vehicle has had a lovely maintenance record already and everything I have done has complimented that further and whilst I have saved on the parts prices the parts themselves have been correct to how Aston sold the vehicle originally.

Other items I have bought include a Bluetooth transmitter for when I fancy Spotify over the glorious V8 which I can tell you is not often! The wiper blades have been swapped out for some Bosch Aero (classic fit edition), I have had the chrome window surrounds wrapped in gloss black.

The vehicle was also professionally detailed locally including paint correction and a three year ceramic coating applied to it in July 2020.

I purchased a front splitter for it from Alistair, a guy I met through an Aston Facebook group, he is now making these on scale and are a great  product. As a quick plug he is also a fantastic motivational speaker if anyone reading this is interested!!

Being clumsy I have already managed to break the splitter in three places on a kerb but Rick Kerry and the great team at Ipswich Accident Repair sorted it back to A1 condition!

The later 6 bar grille is fitted to the vehicle over the earlier 8 bar version.

Overall I am really happy with how my experience of this car has panned out. I use the vehicle at least once a week if only to cover 10 miles or so, I am a true believer of keeping everything moving and it will pay back dividends. Cars do not like sitting still for long periods and therefore giving it that weekly run keeps me sane and also does the world of good.

I’ve met some great people through ownership, we have a local group (you know who you are) in Suffolk and we meet up when we can for a coffee and share knowledge with one another, this isn’t anything official just a group who have a similar love for these vehicles.

Having bought the car in June 2019 I have now covered 8,000 miles in the car, it’s been around the North Norfolk coast twice, once with my partner and again with my great friend Simon & his stunning Ferrari Testarossa.

I even had a  talented family friend create a bespoke painting of it!!

What’s the future for the car… Well I would love to fit some sports cats to the vehicle for additional growl from the rear pipes but that is likely further down the line.

For now I just intend to keep doing what I’m doing and bring it out on nice days for some leisurely drives and B road blasts.

If you happen to see me, don’t be afraid to waive or stop and say hello, I hope you’ve enjoyed this mini series then please feel free to leave a comment, I will read them all.

Maybe I’ll update again further down the line, for now though, thank you for reading and see you soon!