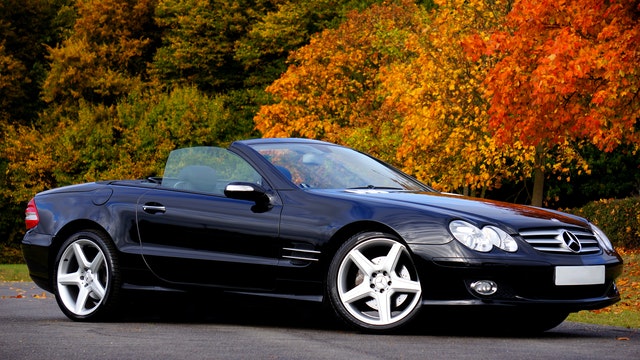 These blogs are all about, what we believe is a future classic and also a car that we feel could be a good or sometimes a great investment. So no more waffle, we give you, the Mercedes Benz 500 SL (R230)

The first generation R230 appeared as the Safety Car for Formula One at the 2001 German Grand Prix in Hockenheim and soon after, the street version was unveiled with Mercédès quoting “the most powerful Mercedes Benz is ready for launch” being the 55 SL AMG.

Did you know that the R230 was the first metal hardtop closing convertible that Mercedes built? that alone is surely worth a future boast when talking to your petrolhead friends in your local. This replaced the standalone metal hardtop from the predecessor, the R129, which we have also noticed are starting to appreciate and gaining the “classic car” status that some think it deserves.

The R230 SL, for us, is a timeless design that without a doubt makes your neighbours think you have quite a bit of money, when in fact these thoroughbred cars are now at rock bottom prices and there is only one way it’s going, up!

We were recently discussing with a Vint-tro community member about what he likes about his R230, and his first reply was, what better can you buy for £4000, a very good point one agrees with when looking over his much-loved ride.

The 2006+ facelift models had a large increase in power with the SL500 producing in the region of 388bhp and known to be less prone to problems. Often seen advertised between £5000-£9000, with lower mileage examples, with great history a bit more, that is not a lot of money particularly when these cars were sold to wealthier clientele who could afford these brilliant engineered styled cars to match their lifestyles at the time for over £80,000.

Our reliable source tells us that when motoring with the roof down at higher speeds, the wind noise can be quite annoying so a proper Wind Deflector is recommended and he assures us this completely transform your R230’s convertible experience.

If you’re looking for that little bit better performance a modification which is highly recommended is to fit an AMG style quad exit exhaust system, not only does it provide a great exhaust note, it also gives the rear end a much needed aggressive look too.

Unfortunately, like the Jaguar XJS, the R230 SL’s are known for being potential money pits and the number of them on the road is decreasing every year with the majority either being scrapped or going to the breakers yard, so this is why we believe it could be a potentially good investment.

If you are thinking about purchasing an R230 500 SL, we recommend that it is a facelift model and has a well-documented history and whilst we feel they will not rival the XJS in value in ten years time, we do think it could be the next best alternative, but of course what do we know, stranger things has happened!