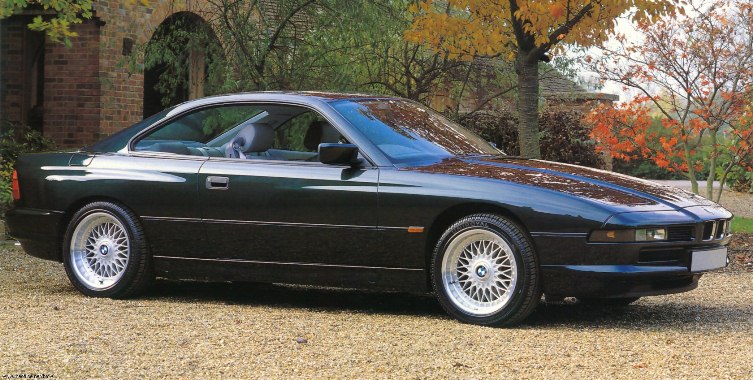 The car we are talking about is the BMW E31, a Grand Tourer built from 1989 to 1999 powered by either a V8 or V12 engine. A car where the lines flow amazingly, a car which looks so aggressive but undoubtedly very attractive on the eye.

The E31 had a short life with the first model being the 850i, which utilised the 5.0 Litre M70 V12 engine from its predecessor the 750i. As with the 750i, the engine was mated with the 4-speed electronically-controlled automatic gearbox and BMW’s ‘Z-axle’.

However many people favour the V8 models, the first of which was the 840i and was introduced in 1992. As you expect from one of the worlds finest car manufacturers the V8 was a lightweight all-alloy design which sported 32 glorious valves, 4 overhead camshafts, 8 individual ignition coils and sequential fuel-injection. The later E31 40ci (1999) has the M62B 4.4Litre V8 engine which is married to the Steptronic gearbox and all of this helped the car propel itself from 0-60mph in the time of around 6.5 seconds, that’s so delightful for a large coupe!

Pop up headlights was nothing new by the time these cars were produced but for some reason they really suited this car, reminds me of a shark that was coming to bite you when seen in the rear view mirror.

With its vicious style it looked even better when the windows are dropped! … this rare coupe just seems to go from cool to sub-zero.

So where are the current prices for these stunning machines? … well trawling through the likes of Ebay, Pistonheads and similar classic car sites you can pick up a tatty 840i for less than £5000, but then you’ll often see a well sorted 50K miles example with good history in the £14-£20,000 bracket. We’ve recently seen a 20K mile car for £35,000 but of course these prices do depend on the model itself.

Produced in small numbers with unquestionable BMW build quality we believe in ten years time you won’t get much change from £50-£60,000 for a well sorted, low mileage 840i.

Is there a better investment? … you decide!

Until next time, peace & love