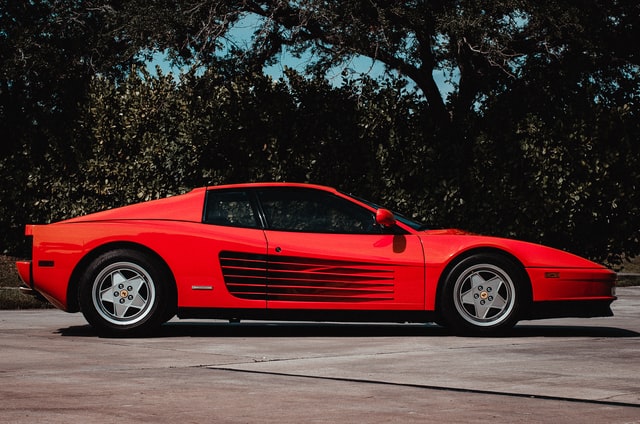 Like many of you, us guys at Vint-tro are always scanning the classic and retro car market. So we thought we would write regular blogs on cars we believe are the ones to watch for a good and enjoyable Investment.

We certainly don’t have a crystal ball, but what we do have is years of experience, passion and enthusiasm. We believe we have a good idea of what cars will become firm favourites and be a sound investment. So here we go;

It’s around mid day, June 2015 where Mark and I (Simon) are at the Anglian car auctions http://www.angliacarauctions.co.uk/en/home/ when suddenly I stop, stare and become totally transfixed like a young boy who has just seen his favourite footballer. Dressed in rosso red, I honed in on the most, or if not the second most, ever iconic 80’s supercar, the Ferrari Testarossa. Oh and by the way it reached its reserve and was sold for £45,000 with less than 40K miles recorded!

People who lived in the 1980’s will remember the Ferrari Testarossa in its hay day. Alongside the Lamborghini Countach, this iconic poster car found fame on the American TV show Miami Vice, driven by detective Sonny Crockett played by Don Johnson. The car was so famous even the retro arcade game Out Run used this Ferrari as its main feature.

The Testarossa was one of the highest produced Ferraris ever made with over 10,000 examples built between 1984 and 1992, however only 438 were made in right hand drive. It was only a few years ago that this friendly supercars’ re-sale values were so low.

Sporting a glorious boxer design Flat 12, 390 bhp engine, this Ferrari propelled itself from 0 to 60mph in just over 5 seconds and with its wide and aggressive stance, this Pinninfarina designed car certainly ticks the box in the extravagant looks department.

The Testarossa has, at long last, lost its reputation as an over indulgent ‘play thing’ for 80’s yuppies and is now sitting firmly in the cool zone of classic cars and collectors are taking note.

There has been a huge surge on 80’s Ferrari’s, particularly the 308 in recent years and we believe the time has come for the Testarossa to take to the stage once again and claim the bragging rights of being the most iconic ‘classic’ supercar of all time.

UK low mileage RHD examples are fetching anything from £110,000 – £180,000 and given another decade we feel the Testarossa could be a half a million pound asset, surely the best investment one could ever make.

So until next time, peace & love